The Economist: benefits of using more wood in buildings

The authoritative weekly magazine "The Economist" has published in its latest issue two articles about the benefits of using more wood in buildings.

The main messages of the articles (from the point of view of the European sawmill industry) are provided below:

First Article: The House Made of Wood 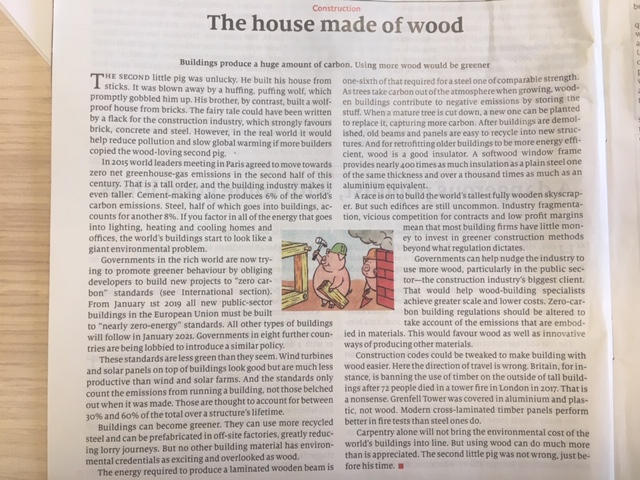 [28.11.2022] European Forest Innovation Workshop: “The role of innovation in managing new challenges in the forest-based section at regional level in the EU"

[28.11.2022] Remarks by President von der Leyen at the plenary session of the New European Bauhaus goes Into the Woods event

[26.10.2022] Directive of the European Parliament and of the Council on the energy performance of buildings

[18.10.2022] Event: Building the Bioeconomy together: How renewable materials can make Europe an industrial leader (Brussels, 10 November 2022)

[11.10.2022] Building the bioeconomy with nature-based materials and solutions within the New European Bauhaus

[27.09.2022] JOIN US:Building the bioeconomy with nature-based materials and solutions within the New European Bauhaus

[06.09.2022] Prediction of greenhouse gas emissions for cities and local municipalities monitoring their advances to mitigate and adapt to climate change

[02.09.2022] EVENT:How can we strengthen the contribution of forests in reaching EU climate goals?

[11.07.2022] Grant to boost adoption of sustainable mass timber in construction