EESC Public Hearing: Building a coalition of civil society and subnational authorities to deliver the commitments of the Paris Agreement

On the 17th of May the EOS secretariat participated in a public hearing organized by the European Economic and Social Committee (EESC). The EESC is currently working on an opinion on" Building a coalition of civil society and subnational authorities to deliver the commitments of the Paris Agreement". This opinion will provide an opportunity to address the issue of climate governance in the context of the implementation of the Paris Agreement and to identify the mechanisms and measures for civil society to be genuinely involved. 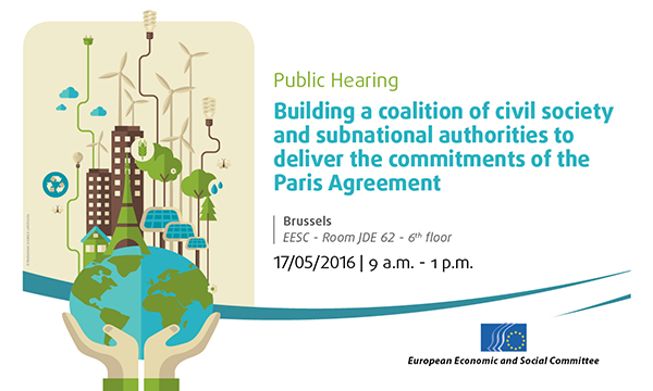 An important agreement was reached in Paris at COP21 (the Conference of the parties to the United Nations Framework Convention on Climate Change (UNFCCC)) to keep the increase in the global average temperature to well below 2°C above pre-industrial levels and to pursue global efforts to limit the temperature increase to 1.5°C above pre-industrial levels.

The outcome of COP21 clearly recognised the efforts of all non-party stakeholders, including civil society, to address and respond to climate change. The EESC has advocated for civil society and citizens at global, national and subnational levels to be fully involved in the development, review and, above all, implementation of the COP21 Agreement.

During the hearing, stakeholders belonging to the public sphere, including local authorities, business, and trade union representatives, emphasized that it will be crucial that all levels of governance and civil society will play a role in the implementation of the decisions taken in Paris as it will be up to them to put in practice those decisions through their daily actions. Therefore, a multi-level approach, cross-sectoral and cross-stakeholder cooperation will be crucial. Divestment in fossil energy should be encouraged. Communities which invest time and money shall be rewarded for their efforts, whilst making sure that they do not spend too much money in the energy transition, so as not to give the impression that clean energy are too expensive. Furthermore, these projects should be seen as creators of jobs, both high-skilled and low-skilled, and harbingers of growth. People working in industries which will decline should be trained for them to find employment in a transitioned economy.

For a positive outcome, it will be crucial that best practices are shared. There is also a need to create long-term, resilient structures which will be able to ensure continuity even in case of a government change which might be willing to reverse clean policies. A good idea could be to create local energy agencies to monitor progress on energy transition and to involve citizens at local levels; such agencies would also act as connectors between state level and local levels; indeed, most stakeholders saw the transmission of decisions taken at state level but to be implemented by local actors as the biggest challenge to achieve to COP21 aims. Also, it is important to emphasize that the costs related to the energy transition are short-term while its benefits are long-term.

As for the European Union, stakeholders asked more flexibility in the usage of EU funds and stressed that in the State of the Energy Union (a EU level strategy for a resilient energy union with a forward-looking climate policy) the aims are not conflicting with the Paris commitments. The European Commission reminded that 20% of the 2014-2020 EU budget is devoted to climate change.

In short, Paris was a good start but there is a lot to be done and the commitments will be delivered only with cooperation between different stakeholders.