Well-educated skilled workers are key to a larger use of wood in construction. ProHolz fosters the appropriate education in Slovenian and Croatian universities and turns directly to future planners and architects with an international and cross-disciplinary workshop programme.

The idea of the workshop programme follows the principle of master programme: selected students work for a fixed amount of time on a real task and are supervised across the disciplines by recognized professors. The implementation of the plan will inspire the scientific exchange between Austrian, Croatian, and Slovenian universities. It makes possible for prospective architects and planners to have concrete experience of wood as a building material and to take advantage of existing Austrian know-how.

In Summer 2016 ProHolz Austria has organized for the first time – together with the Technical University of Graz – the master programme "Urban renewal of a school with CLT modular elements" at  the University of Maribor and at the University of Zagreb. 24 students, grouped in 10 interdisciplinary groups made up both of engineers and architects, have elaborated ideas for the renovation and the expansion of a school in Graz. The focus is on prefabricated constructions with usage of elements of cross-laminated timber. With a renovation of the façade the school building – which was built in the 70s – is supposed to be optimized from an energetic point of view. The programme included a series of lectures in the participant universities, several workshops with the teachers on the elaboration of the projects and specialized inputs from  Austrian experts such as architect Simon Speigner or structural engineer Richard Woschitz.

“With this Programme we educate students for the future, we reinforce the awareness over the potential of building with wood and we make Austria the leading country when it comes to modern building solutions with wood”. With this words Mr Christoph Kulterer, chairman of ProHolz Austria., illustrates the motives and the potential of the project.

Science of Constructing with Wood with a practical basis

The results of the Master Programme were presented on the 1st of September 2016 at the Wood Fair of Klagenfurt. Out of the projects drafts, three were declared winning projects. They were summed up by the participating teachers. “The transfer of academic knowledge to practice has been done in an exemplary way. The proposed solutions are of high complexity from the static, technical and creative point of view” declared Prof. Miroslav Premrov of Maribor University. “The workshops of Austrian professors and experts have led to a better understanding of cross-laminated timber, which is still a relatively young construction material; the working methods of the program are valuable even in other sectors”, added Ivica Plavec from the University of Zagreb. “Young experts, which will build the cities of the future, have received the best possible training through the confrontation with this real project, which is worth replicating”, stated Assistant Professor Vesna Zegarac Leskovar of Maribor University. Prof. Vlatka Rajcic of Zagreb University added that “even the teaching staff had the occasion of exchanging knowledge and experience”. “While beyond-the-border collaboration between universities takes usually place in research and development, in this case education on a real-life case has been given”, declared prof. Gerhard Schickhofer, TU Graz.

As the Master Programme has proved to be a good format for know-how transfer and networking, ProHolz is pondering a continuation and an extension of the programme. In the plans of the organizers there is indeed a programme in Summer 2017 at the Universities of Ljubljana and Split. Also, an extenson of the programme in Serbia, as well as in Czech Republic and in Slovenia is going to be considered.

In the picture below: the EOS Member Mr Christoph Kulterer (on the right) with some students. 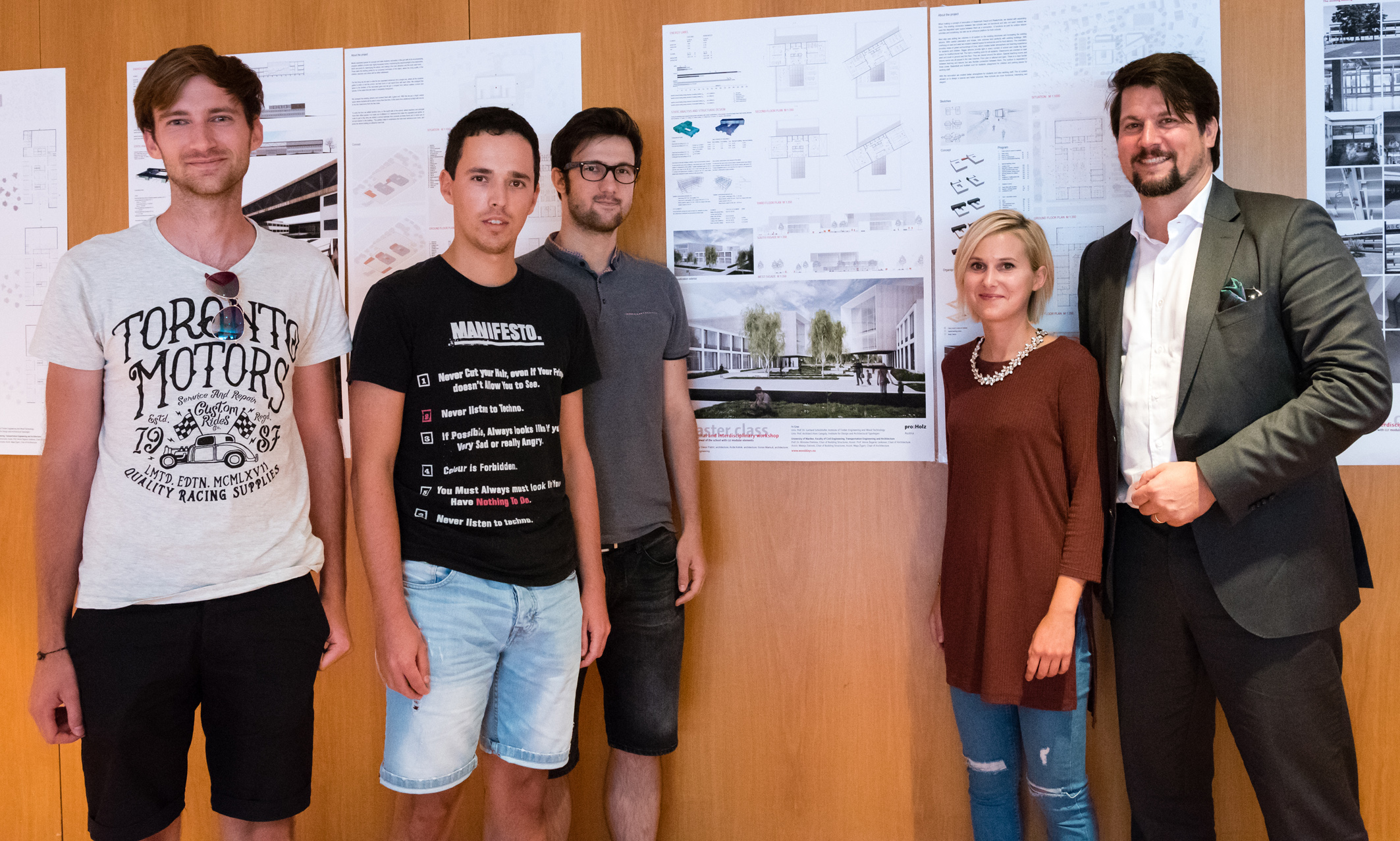